Three day recovery puts me off.  Think it’s a foregone conclusion that the Patriots will win  by 30 anyway. 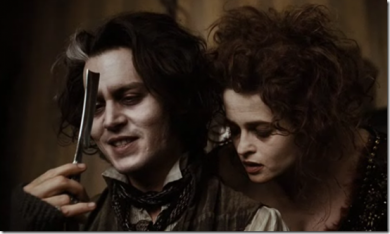 I have to confess from the outset to something of an on-off respect for Tim Burton. Whilst I loved the Nightmare before Christmas I was ambivalent about most of his other work and genuinely disliked The Corpse Bride and Beetlejuice. I am no great fan of Depp’s either. Nevertheless, I am a huge fan of the whole Sweeney Todd story and Stephen Sondhiem’s masterpiece on stage had the potential, as raw material, to raise Mr Burton’s stock in my eyes. But only if he got it right.

Sweeney Todd is essentially an opera, not even a musical. It features wall to wall singing with what is hardly a stellar cast of musical talent: Rickman, Bonham-Carter, Depp, Baren – Cohen (Hilarious as the Italian Barber) and Timothy Spall are not exactly renowned in the hit parade. Fear not though. There is barely a bum note to be heard. The great thing about Sondhiem’s majestic score is that it’s not so much the technical singing ability as the passion, insight and energy that makes his music and stunning lyrics come to life. Add to that sublime art direction and cinematography and you have yourself a bleak gorefest full of humour and pathos.

“There will be blood” I assumed. There was.

Burton, for me, styles films as much as he directs them, but one cannot argue with the quality of performance he ekes out of his other half (Helena Bonham Carter). Mrs Lovett, the pie shop owner and Sweeney Todd fancier, is every bit as important a character as Sweeney himself and much of the film focuses on Bonham’s adoration sadly, for her, reciprocated by an equal and opposite dismissal by Depp.

The comedy is glorious too and Timothy Spall makes a lovely, grisly sidekick (the Beadle) to Alan Rickman’s gloriously camped up Judge Turpin. Sacha Baron- Cohen’s cameo appearance as Senor Adolfo Pirelli is laugh out loud.

If you think you dislike opera make one exception in your life and see Sweeney Todd. As my 13 year old son would say… It’s a beast.