The Apprentice improved as a viewing experience as the season wore on but it was by no means the best.  Nonetheless we had a good final (Although Rocky didn’t seem to think so.)  The last pick in that horrible playground throwback at the start of the programme; he looked distinctly un-chuffed about that and never raised a smile thereafter.

It was a complicated task, creating a new chocolate brand in three days, something that even we professional marketeers would never be challenged with in real life.  For much of the show Colgate Girl’s team were going to call their brand “Intimacy”, and it was going to come in three sizes; small, large and ribbed, but they saw the light and opted instead for some Faux French pish.

They were outdone in all but the taste stakes by Yasmina’s Shock and Awe brand.  (It was shocking and we were awestruck by how bad the chocolate tasted; anyone for strawberry and basil?)

Did the right one win?  Only Sir (sorry Lord) Alan will know.  I was surprised by the outcome I have to say, but frankly I wasn’t that bothered.

Roll on next year.  Apparently Margaret won’t be there as she’s gone off to finish a Phd in papyrus.

In honour of her departure I think we need to share  Joe Cornish’s outstanding tribute to her. 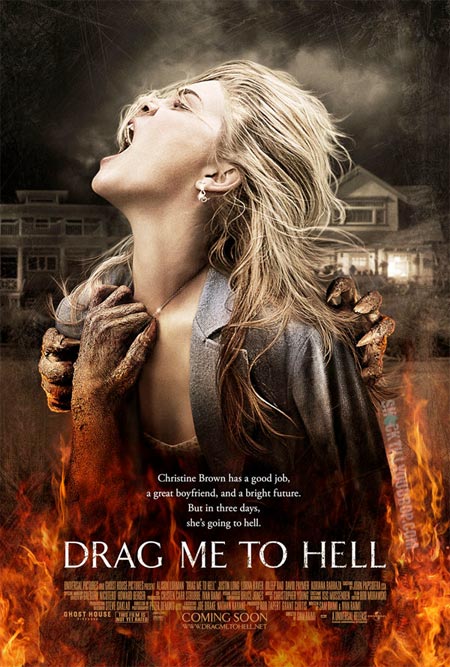 In 1981 I was fortunate enough to take a chance on a first time director’s movie at The Edinburgh Film Festival.  The subtlety of the movie’s title – The Evil Dead – caught my eye and I was transfixed with terror as Sam Raimi treated us to a low budget classic.  Of course time has passed and Raimi has climbed the Hollywood ladder and now directs Spiderman.  So I was delighted to find that he was back in the horror genre, this time with a big budget, but an unknown cast. and a great title…Drag me to Hell.

I took my 14 year old daughter Ria along to see it, on her request, having warned her that it was no ordinary scary movie.  That it was the real deal.

“Jesus Christ.” she shrieked about 15 times as jump after jump assailed us.

The publicity says this;

“Christine Brown has a good job, a great boyfriend, and a bright future. But in three days, she’s going to hell.”

It’s a comment on our times.  The first Credit Crunch horror movie and a lesson that if you mess with gypsy women over their mortgages you’ll get what you deserve in return.

Sam Raimi makes sublime horror movies.  He’s taken on board Hitchcock’s theory that 20 minutes of suspense are worth 20 seconds of horror but he condenses this.  You get many, many more shocks per square yard with Raimi than you ever did with Hitchcock and yet he never overdoes them.  But they come at you in wave after wave.  And the humour is brilliant.  He really likes a bit of sicko stuff along the way and makes the most of this.

Blood, snot, vomit, embalming fluid, they all get a run for their money.  We see popped eyeballs, stapled eyeballs, flies entering orifices you wouldn’t want flies in if it was you, limbs eaten whole, animals killed and mutilated.  We get fleeting shadows, whispers, banging doors, flashbacks, mysterious winds and subliminal framing.

We get NOISE.  This film is so loud that even my mother could hear it.

Every single trick in the horror (and comedy horror) book is used.  Is it cliched?  Not a bit of it.

An instant classic that climaxes perfectly.  (Maybe it could even win Oscars?)