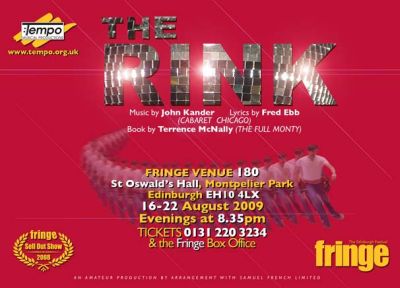 I was fortunate enough to take in not one, but two of Tempo’s fringe shows tonight.

Nobody Does it Better is not billed as a big show but believe me it is a great treat. It showcases around 20 James Bond movie theme songs in a variety of solos, company and dance numbers. It’s great fun but this is really only the support (no disrespect) to Tempo’s main production – the rarely performed “The Rink”.

The music is written by Chicago and Cabaret’s Kander & Ebb and is in that style.

The script is brilliantly written by The Full Monty writer Terrence McNally.

What a great show. It’s a delightful mix of comedy and pathos and the singing is universally excellent; as is the acting.

The show’s glue is the mother and daughter duo of Norma Kinnear (wow) and Gabrielle Pavone (wow) but is monumentally supported by the male wrecking crew who take on a variety of parts as well. One criticism is that Tempo’s programme doesn’t establish who is who so I’m not sure who the excellent Dino was. This is musical theatre at its best.

It’s only on till Saturday so dither ye not. Get there pronto.

I promise you will enjoy both shows and particularly The Rink. (Oh. And the band is brilliant. Especially the trombonist!!!)