Pedro Almodovar produced this suite of six short films all based on the theme of revenge, written and directed by Argentinian filmmaker Damián Szifrón and at times astoundingly photographed by Javier Julia.

(His use of bokeh in the final film on a Buenos Aires Rooftop is particularly worthy of merit – but I apologise for even mentioning it because I know how wonky that reads;)

So, in six short films there will be winners and losers and to get the bad news out of the way quickly they slightly outstay their welcome towards the end, partly because we’ve worked out how Szifrón thinks and so we can spot the plot twists a little too early.

But put that to one side and you have a sextet of extraordinarily original little gems. 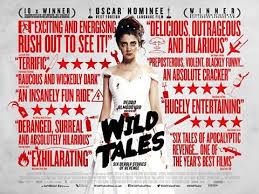 The advantage of being penned, directed and shot by the same team is that they really do hang together as a unit and there are a number of sit up in your seat bolt upright moments along with number us belly laughs.

The first of the six is something of a premonition of the Germanwings disaster but with a huge dollop of humour built in.

What follows includes a number of automotive moments.  Two of them have road rage at their core (or at least road tax rage) and both stand out.

The movie was nominated for the Foreign language Oscar but faced pretty stiff competition this year.

Me?  I think we’ll be seeing a lot more of Szifrón.  It reminds me (in a different way of Amores Perros in that it uses a short film format to establish the credentials of great south American film making and that didn’t do Alejandro González Iñárritu any harm, as he has progressed to nominations for best picture with Babel and then rightfully take home the moolah with Birman this year.