Staffa is a 12 minute film of the island that is home to Fingals Cave.  It consists of a Tryptich of films in which Drones capture the island and the cave at different times of year set to Ned Bingham’s score which is an homage to Mendelssohn’s celebrated Hebrides Overture and was recorded by the RSNO.

It’s a delightful find in the Boardroom of the National Library and was so good I sat through it twice (Big deal. Ed).

A perfect blending of drone photography by Stef Williams and Pete Stanton and music that is both stirring and sublime. 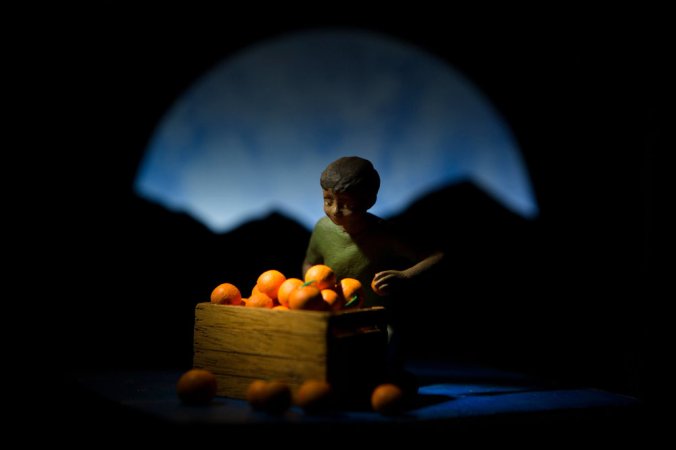 This is a truly unique theatrical experience.  For a start there are no actors.

Essentially it is a moving diorama of tiny little figures that light up in small ‘stages’ over the course of 45 minutes and accompanied by a high quality recording of the story of the flight of two brothers from Afghanistan to the ‘Promised Land’ that is England and their scrapes and scraps along the way.

It has received huge praise and from a technical point of view I would certainly echo that.

My only criticism is that the story itself lacked real emotional grit.  It’s a familiar story now, over familiar almost, that added nothing to the body of written and film work out there.

But technically an absolute triumph.  For that reason I was pleased to see it. 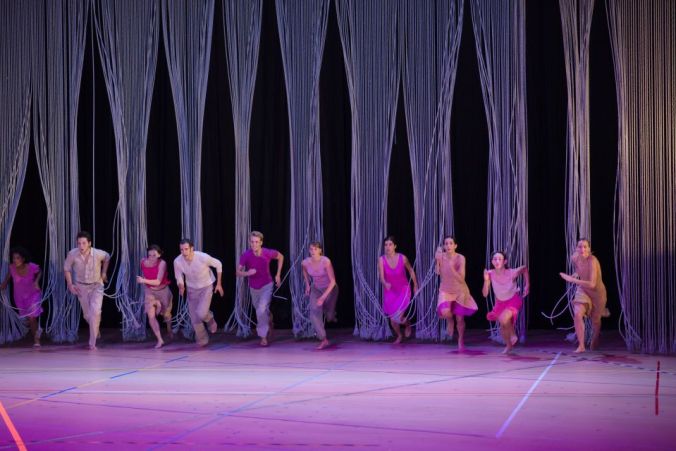 This is my year of dance.

I am no modern dance expert but I know when I see something that has to be at the top of its genre.

For an hour we were serenaded by the quite beautiful Steve Reich’s Music for 18 musicians while 10 dancers (7 female, 3 male) execute a miracle of coordination in front of, and occasionally through, a circular steel mesh curtain.

Here’s what Tom Service has to say about Music for 18 Musicians in The Guardian.

Music for 18 Musicians creates a labyrinthine experience for the listener. You’re locked into the mesmerising way in which one pattern morphs into another, addicted to the groove and pulse of the music at the smallest scale of what’s happening from one note to the next.

At the same time, the music describes a bigger journey, as melodies and patterns recur over the scale of the whole piece. Reich builds up waves of density and complexity that crest at different points (listen out for Section V and Section IX especially), creating an experiential arc that does much more than repeat a sequence of chords and rhythms.

I honestly don’t know what it was about but it was transfixing.  The subtle costume changes throughout the show perhaps hinted at the changing of seasons.  It was almost unnoticeable because the palette is largely pale, but suddenly you realised the corps was now pink, now beige, now gold.  Beautiful.

And the choreography.  My God.

Reich’s piece is described above as labyrinthine and that’s what the dancing becomes with waves, flows, counterblows and pauses that result in sublime almost falling over moves (swoons) that never fail to make me swoon.

I don’t have the technical language to describe this but the experts acknowledge it as a masterpiece and I have to concur.

Steve Reich, for one, was thrilled by this.