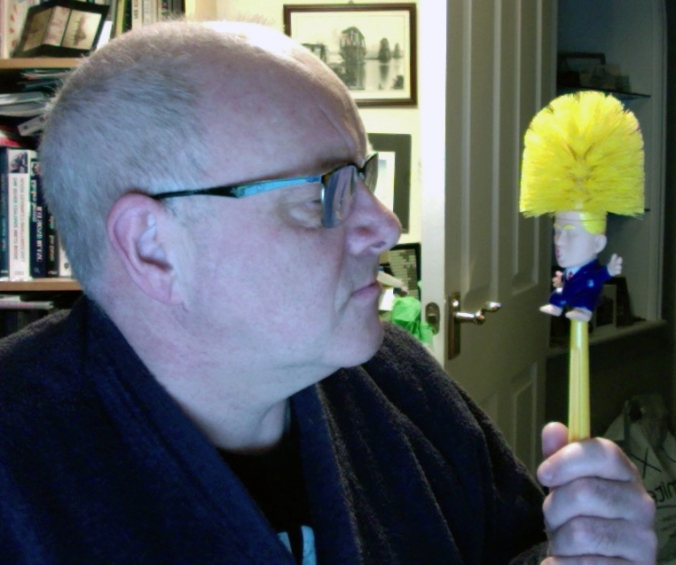 My face-off with our new Donald Trump toilet brush.  Like the Democrats, I won, just as they did at the Mid Terms.

He did not get any funding for a wall. And on Friday, he did not advance any new arguments for building one. In fact, many of the claims he made were recycled heavily from previous comments and contained many of the same misstatements and exaggerations.

Also notable was something Mr. Trump did not say, namely that Mexico would pay for the wall, one of the most often repeated, and unsupported, claims he has made on the border funding dispute.

He also indicated that he was open to declaring a national emergency or shutting down the government again if Republicans and Democrats cannot reach an agreement on wall money by the February deadline.

He has agreed to back-pay employees very quickly or as soon as possible.  I suspect Mr Trump has not got a strong grasp on tautology annuls there is a significant distinction between the two.

He thanked and praised the people he had completely and utterly fucked over on a point of principle that the Democrats in the Senate will never give in to,  because it is singularly the most ridiculous policy objective in the modern American history.

On Friday, Mr. Trump praised federal workers as “fantastic people” and “incredible patriots” and acknowledged the toll they had suffered. But several federal employees said they still felt angry after being treated like pawns, they said, in a five-week-long Washington standoff. They said the shutdown had left deep scars on their families and finances and undermined their faith in elected leaders, and in the careers they had chosen.

A Homeland Security policy will certainly be forthcoming in the next 21 days.  Fair enough.  But it will not come in the form of a very big nasty wall.

“Everywhere you go in the world walls work.” he claims in a Watch With Mother speech. Andy Pandy would have been very, very impressed.  Very.

Later on Friday, the president argued that he had not backed down in the feud over wall funding, claiming the agreement “was in no way a concession”.

Ann Coulter, the influential conservative commentator, called Mr Trump “the biggest wimp ever to serve as President of the United States”.
The Telegraph reported…

The president also suggested he was still considering taking unilateral action by declaring a national emergency, which would allow him to use the Pentagon budget to build the wall. However, that would face legal challenges.

Mr Trump said: “I have a very powerful alternative, but I didn’t want to use it at this time.

“They [The Democrats] are willing to put partisanship aside, I think, and put the security of the American people first. We really have no choice but to build a powerful wall or steel barrier.

“If we don’t get a fair deal from Congress, the government will either shut down on February 15, or I will use the powers afforded to me under the laws and Constitution of the United States to address this emergency.”