Eight hours in a theatre (or in this case my two favourite cinemas; The Cameo in Edinburgh for Part 1 and The Hippodrome in Bo’ness for Part 2) is a daunting prospect, especially when the subject matter threatens to overwhelm you emotionally.

In fact it is a breeze because the writing of Tony Kushner and the direction of Marianne Elliot (The Curious Incident of the Dog in the Night) pepper this doomsday epic with both humour and beauty (in staging, lighting, sound and movement – it’s a technical masterpiece throughout).

The acting is uniformly brilliant with Andrew Garfield in the lead role of AIDS sufferer Prior Walter.  But the support he gets from Nathan Lane, in particular, is astounding.  Core ensemble shout outs also have to go to the entire cast especially Denise Gough, James McArdle, Nathan Stewart-Jarrett and Russell Tovey. 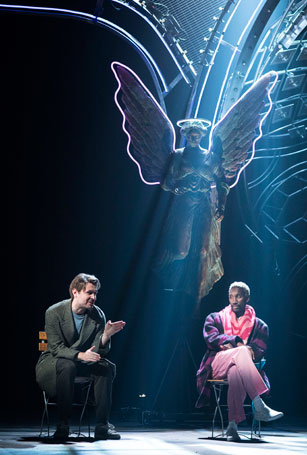 Whilst, at times, you might want Garfield to slightly reign in the histrionics (and the fey gayness to be honest) you sit with bated breath waiting for Nathan Lane to go off on vitriolic outburst after hateful rant.  He plays a corrupt, gay bashing (ironic) lawyer who has no limit to what he will do to save himself (he too had AIDS but says it’s cancer, having spent his entire life in the closet, much to the disgust of most of the rest of the male gay cast).  He is the highlight of the show.

Although ostensibly a ‘gay fantasia’ the background of story is built largely on a religious platform.  The AIDS ‘plague’ has clear biblical connotations and the angels of the title are fantastical creations that are there to question morality, justice, belief and whether or not there is an afterlife.

The creation of the ‘main’ Angel played by six dancers/puppeteers and Amanda Lawrence as the angel itself is breathtakingly original and continuously mesmerising.  She’s magic.

I grew up during the ‘AIDS Epidemic’ and my home city of Edinburgh had to deal with an almost unique needle sharing problem, as well as the gay spread of the disease, (It’s well captured in Trainspotting) so, that meant it was as much a heterosexual issue as a homosexual one in Edinburgh,  Consequently, HIV/AIDS was very front of mind in this city.  Another reason that the story strongly resonated with me.

Two of the central characters are Mormons and that particular creed comes in for some pretty hefty slagging although overall you sense that Kushner has deep religious beliefs or at least is hedging his bets on whether there is a God.  The fact that both Louis and Nathan Lane’s evil character are both Jews is also an important part of the storyline and leads to considerable debate about the morals of that belief, compared to Christianity.

Politics, too, feature heavily in the storyline with a clear leaning towards both Socialism and the Democrats that make Reagan (the then leader) an object of ridicule.  Indeed Part Two is subtitled Perestroika with a certain reverence for it’s chief architect Gorbachov in evidence.

One of the lead characters (a gay nurse, Belize) former lover of both Prior (Garfield) and Luois (McArdle) and an ex drag queen is black and proud of it. As he nurses Lane’s character (Roy Cohn) this opens up another topic for Kushner to at times hilariously, at times terrifyingly, exploit; racism.  The man is a pig and it’s all that Belize can do to maintain his dignity and ethical professionalism to tolerate the monster that he tends.  In fact a relationship develops that is, at times, surprisingly tolerant and even tender.

Meanwhile closet gay and Mormon, Joe Pitt (Tovey), married to valium addicted Harper (the superb Denise Gough) is straying into an experimental homosexual exploration of his sexuality with Louis (former lover of both Belize and Prior) this has massive personal  consequences.  McArdle in particular plays a really strong supporting role and has the subtlety to play his part with conviction and sympathy.  He’s the ‘tart with a heart’ but can’t deal with all the consequences of these tumultuous times for the world’s gay population.

It’s complicated.  And that’s why Kushner needs eight hours to unravel the labyrinthian plot and the fundamental BIG questions it tackles, but he does so with great skill and lightness of touch.

The National Theatre are to be applauded for reviving this monumental work.  And it’s to our great fortune that we can experience it (from essentially front row seats) in small movie theatres all over the world.

A production that has wowed audiences and critics alike, I expect to see it pick up many more London Theatre awards.  If you get the chance to see it when NTLive does a reprise, kill for tickets.

Our new Pope opted for Frankie’s nom de plume and today at mass our priest – the wise old Western Islander, Fr Tony, gave us an interesting insight into his inspiration.

I was particularly taken by this quote from St Francis that he referenced in his Homily.

“Preach the Gospel at all times (and use words if necessary).”

Wise words indeed, particularly in these times where religion is used as a front for the most heinous of behaviours.

Ghandi made a particularly interesting observation (again my Source is Fr Tony) when he said “The trouble with you Christians is that you have great preachings but don’t live up to them.” (I paraphrase I’m sure).  That observation would benefit not just Christians of course.

Then I headed up to St Giles Cathedral, on the Royal Mile, to see a friend of mine sing in the choir.  If you know anything about Scottish history you’ll know that that’s not a Catholic worship place but it is very Christian.

I loved it and can recommend Sunday Service there at 11.30.

An extraordinary choir and an amazing location, set off by this stunning angel…

And a great organ…

Whether you see this as ironic from the point of view of the church and gambling or the one that I prefer; Christainity and Islam, it made me chuckle.  Central Dundee.  Full of surprises.