Having thought about Calderwood’s signing of 31 year old “Junior” Agogo (he’s not THAT Junior at 31) for the Hibees I am wondering if it is worth a trip to Easter Road; if only to hear the Einstien Agogo riff when he scores.

I don’t think anything has put as much of a smile on my face , as a Hibby, for many a month.  (Sorry; year.)

But you didn’t have to be an Einstien to work that out.

I have refrained from blogging about Andy’s exploits for fear of jinxing him.  All I can say is good luck.  Scotland would be a very proud nation were he to succeed in the morning.

After defeat to Motherwell yesterday this very odd man said…

“There are aspects of the game I enjoyed. Problems are there to be solved so that’s what I’m looking forward to doing.”

“We had so many good opportunities, the goalkeeper’s had a number of good saves, we’ve had efforts cleared from the line and I think they defended their goal excellently.

Being, at best, an armchair fan I have not seen him in action but I am told he stands impassively, hands in pockets, barely involving himself in games and certainly not leaping about like the madman Yogi Hughes had become.

It all just seems like he’s going through the motions.

Remarkably he claims to be “really enjoying it” at Easter Road.

Inevitably, the fans’ ire tends to turn to the manager or the Chairman in these sorts of situation.  And Rod Petrie’s extended honeymoon is certainly looking to be over at this moment in time.

The sale of Stokes and Bamba appears to be hitting home now and our lack of action in the transfer market is becoming notable.  I’m a great admirer of what Petrie has acheived at Easter Road but it feels like he has made an extraordinarily bad appointment in Colin Calderwood and his earlier reputation for canniness is in danger of becoming one for penny pinching (for which I am told he has a strong internal reputation.)

Lastly, of course, there’s the team itself; some say it is a shadow of its former self, one of the worst to have played for Hibs in many years (if not ever), but I saw Zemamma, Miller, Riordan, Wotherspoon, Murray, Stack and McBride (all in the squad yesterday) play Dundee Utd on 3rd October 2009 and destroy them before drawing 1 -1.

A month later it looked even better…

And even by mid January Hibs (with this team) were in touch with the top, so my contention is not that it is the players themselves that are poor but the way in which they are applying themselves.

It feels to me that there is a cancer somewhere in Easter Road that is permeating the team and turning good players into bad.  Yogi lost them, and Calderwood has never had them bar one freak night against Rangers.

It needs sorted, and quick.

Hibs result in Slovenia last night defies comment.  Instead I will concentrate on the plus side.

Thank you Greg.  Hope this wins the prizes it deserves. 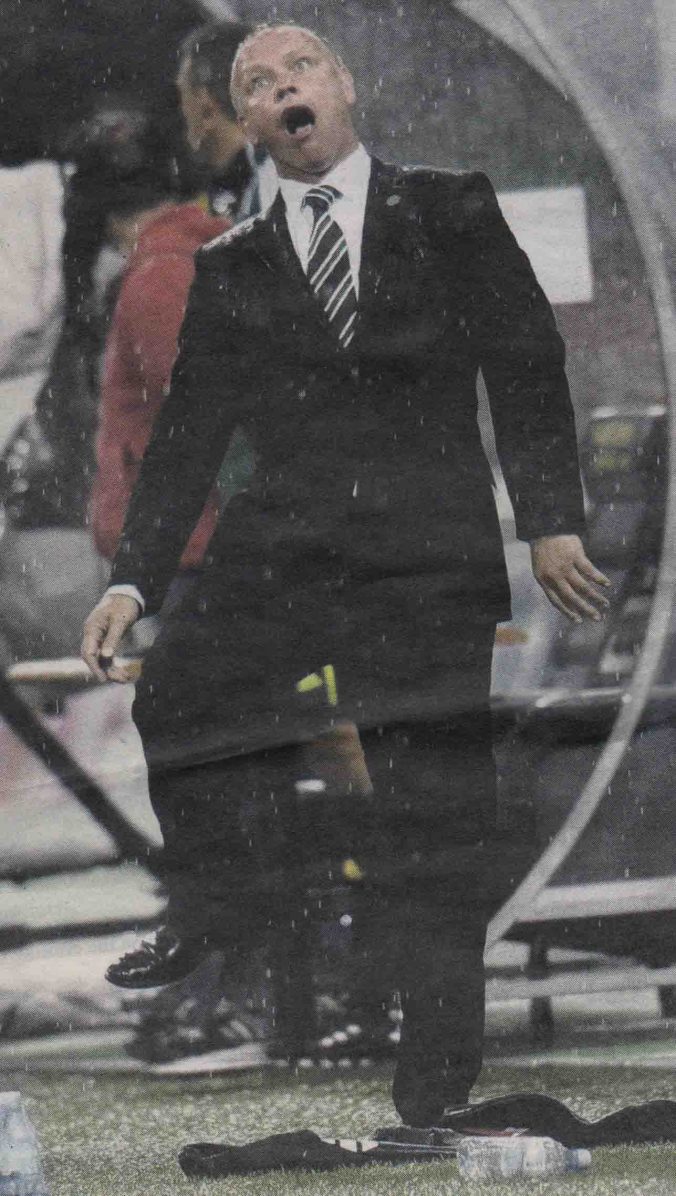 We get a caning.

Celtic have 95% possesion. (Or so you’d believe listening to the commentary; when in actual fact they have 52%)

They have endless chances.  We have next to none (or so you’d believe listening to the commentary; when in actual fact they have only a few more than us. Well, 9.)

We break away and score.

We break away and score (again)

Thank you for that.

Hearts may have had the opportunity, but they’ve all been suspended.

Bring on the Jambos.  Managed from hell.

Gradually Petrie is being vindicated, as I have mostly supported. (He’s had some amazing transfer deals – Whittaker, Brown and Fletcher in particular.)

Intake of breath…we have a team.  Have you seen Liam Miller?  Wotherspoon?  Zemmama (on form)?

I was just talking to Lee,  my Hearts fan colleague, about how nice it was to see Hibs joint top of the league and Hearts joint bottom and he went and got all upset,  libelous about Yogi and basically acted like you’d expect a Hearts fan to act when his team is £30 odd million in debt and joint bottom of the league.

He had to revert to boasting about the fact that they were top of the crap teams last year.   And then he had the audacity to slag Hibs for being one down at half time against St Mirren.  As if it mattered what the score was at half time.  I don’t actually ever recall points being awarded for first half performances do you?

It seems we have hired who I have long thought might be Hibs follow up to Mozza (Tony Mowbray).

A  manger who cares and who has a football brain.  I now expect a much better season from Hibs but the absolute key must be about holding focus against the lower teams.  Yogi needs to teach Hibs that although beating Celtic, Rangers and Hearts is good, beating Hamilton, St Mirren, Motherwell, Aberdeen, Kilmarnock, et al is much, much more important.

Only one problem.  In seeking decent images of Yogi Onliner…this was the only good one I could find.

Ach well, we set them up anyway.

It seems that Hibs have done a deal with 118 118, the telephone directory people, for them to sponsor our shirt.

The deal is certain to kick in in ten years time.

Don’t cry for me argy bargy.

It makes me laugh till I spew reading the angst emanating from Ibrox about Kris Boyd being sold.  What?  The family jewels sold off to a bigger and richer club, (Birmingham City) just when they were doing well.

Well, now you know how it feels!

Thomson, Miller, Whittaker, Murray and, over the fence, Caldwell, Killen, Riordan, Brown and that’s probably not all of them that have been ripped out of Easter Road in the last few years and it’s no different at Hearts or Dundee Utd.

(Oh and I believe they’re after Andy Driver at Hearts.  Bloody hypocrites.)

Not a particularly good European campaign for the Hibees this summer. Three defeats, no goals scored, a veritable humping from a merely warming up Barcelona under the inspired leadership of Messi. Yes, it was, very Messi indeed.

Mixu was at least honest enough to admit that Hibs were given a real lesson. I wonder if we are about to see the start of the implications of selling 11 or so internationals over the last three years.

Anyway at least the Jambos were happy. Gives them five minutes free from contemplation about how their team can survive until the end of the season.

I pity them, I really do.

Although it pains me to say so. This is very funny.

The Cabbage could get into Europe.

Hearts could win the Diddy League. (Although, if memory serves me correctly Mr Romanov predicted that they should be, about now, in the Semi Finals of the Champion’s League defending last year’s title)

Cardiff City are in the English FA Cup Final and they’re not even English.

Rangers are in the EUFA Cup Semi Final.

I blame it on global warming.