If you’ve not see it before this video for Born Free is a shocking centrepiece to the documentary.

I have been a fan of Maya Arulpragasam (AKA M.I.A) for over a decade now so this film came as a pleasant surprise.  Allegedly it’s been over a decade in the making and the relationship between Maya and the filmmaker, Steve Loveridge, has been, to say the least, “challenging”.

She’s a bloody difficult woman, as it reveals.

The daughter of the founder of the Tamil Tigers, a terrorist minority resistance group that was formed in 1976, she had to flee her home land of Sri Lanka in 1986 to set up home in London with her mother, brother and sister while her dad fought the good fight in the face of what she claims was ‘ethnic cleansing’.  It was ten years before she met her father again.

Clearly she has inherited her father’s sense of justice and fighting spirit.

Basing her unique style of hip hop on political oppression she has been an unlikely success, rising to top the Billboard dance charts and  performing alongside Madonna at the Super Bowl where she raised her middle finger to camera and in doing so enraged the NFL so much that they sued her for $16.6 million.

Her right to be angry is, in my opinion, quite reasonable but clearly her detractors think it is a stunt as she has gathered considerable wealth since her politically oppressed immigrant days.

For me, her wealth is irrelevant.

The documentary is a curate’s egg.  Some of it rambles almost incoherently, using found footage on dodgy VHS tape from her childhood, some of it is expertly shot.  Its timeline is also so scattergun as to be quite confusing at times and this jolts the narrative.  At times one wonders what the point really is.

She doesn’t shirk criticism, but the reaction of the NFL on American TV drew loud guffaws from the audience I was in at their petty outrage.  It’s certainly a precursor to Colin Kaepernick’s ‘Taking the Knee’ and a good, if a little childish, one at that.

Madonna was not overly happy.

For fans of M.I.A. this is a must see, for others I doubt you will be engrossed.

For me, even as a fan, it took a good hour to reel me in.  But once there I was sold.

Even the bloody poster’s great: by DO in Leith (http://madeby.do)

“If this were played upon a stage now, I could condemn it as an improbable fiction.”  Act 3.

I urge those potential audience members unfamiliar with this play (like me) to read the Wiki (or other) synopsis two or three times before you come along to this outstanding production, because it is thoroughly deceptive and even more enthralling than Jed Mercurio’s “The Bodyguard” that is thrilling British TV audiences right now.

It’s a Shakespearian comedy, verging, at times, on farce.  And one can immediately understand why Ade Edmondson was cast as Malvalio in last year’s Royal Shakespeare production.  It’s a high comedy role but needs considerable light and shade to work throughout.  Unquestionably this is achieved in bucket loads by Christopher Green here in Edinburgh (transferring as a Co-Pro to Bristol Old Vic for a month from 17 October), he’s the star turn in a simply brilliant ensemble.

He certainly lives up to his famous line…

But my God it’s complicated.  Take this for a start.

In Shakespeare’s original (which this stays true to script-wise if not cast-wise).  Viola cross-dresses as a man to chase (but fall in love with) Olivia on behalf of his boss Orsino.   Viola having been cast adrift from her almost identical looking twin brother Sebastian.

Now, get what Wils Wilson does.

Her identical brother, Sebastian, though, is a white female.  So they couldn’t possibly be mistaken as the same person.

Orsino is a black female, not male.

So the love triangle is now three females, two of colour and the “identical twin”, also female, is white.  That makes the finale tricky if you aren’t concentrating.

Let’s chuck in Lord Tobi Belch.  Not a Lord.  A lady.  Which makes his, sorry her, suitoring of the maid, Maria, very 21st century.

I don’t say any of this to pass judgement because it’s a key constituent of what makes this production so enthralling.  But it’s complicated (as if it wasn’t anyway.)

So we have sex and skin colour deviations from the source material but we also, as you might expect, have a time-shift to deal with.  It’s set in the summer of love (1960’s sometime) at a party, or perhaps in a commune, where the bored or drugged partygoers suggest they “do” Twelfth Night.

That then places the musical ensemble, led with gusto by the one off that is Aly Macrae, in a musical nirvana which is a huge opportunity for composer Meilyr Jones (who also plays Curio).

And it has to be great because, after all, as the bard himself says (Act 1 scene 1)  “If music be the food of love, play on.”

In fact the music is outstanding, immediately likeable, tuneful and with a real groove (I loved it) and it gifts Curio, Feste (brilliant performance by Dylan Read) and Auguecheek (Guy Hughes) almost unlimited show stopping moments.

Feste had us rolling in the aisles – at one point we were treated to a Marti Feldman moment that is burned onto my retina.

I cared a little less for Dawn Seivewright’s Lady Tobi as I felt it was just a little too 100% full on, although it is a massive performance.

The set design by Ana Inés Jabares-Pita – try saying that after a few Chardonnays doll – is enthralling and remains beautiful throughout.

The costumes are triumphal.

And, of course, the whole thing would just be a conundrum wrapped up in an enigma without the brilliant direction and vision of director Wils Wilson.

This is gonna be a great export from Scotland when it hits Bristol later this year.  In the meantime fellow Scots, get yersel’ along.

It was he who started the black injustice protest of kneeling on one knee during the National Anthem and this has driven white supremasists, such as Donald Trump, absolutely nuts for disrespecting the flag.

And it’s him that’s fronting this commercial standing in a US city street in front of a rippling US flag.

This is what Donald Trump calls it.

And he’s right to an extent, there are boycotts from similarly white supremasist Republicans.

But my mate (who doesn’t really like Nike) just bought a White Nike NFL #7 Colin Kaepernick T shirt for £25.

Because this ad moved him.

Sure Nike may lose some customers with this (admittedly a bit Appley) ad, but they’ll win over a lot more than they lose.

Someone at Nike said to a brand manager “Don’t ask if your strategy is crazy, ask if it’s crazy enough.”

I doff my hat. 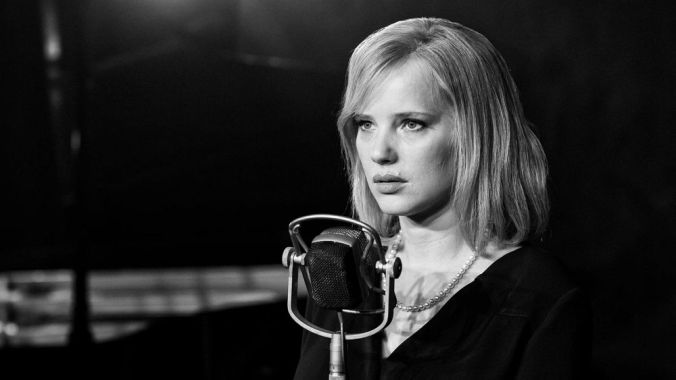 The first thing to state about this beautiful movie is that it’s monochrome.  So stunningly so that at times you feel you are in a photographic gallery rather than a cinema.  The quality of the cinematography is quite extraordinary thanks to Lucas Zal.

It’s also in 4:3 format.  Not the square format of Instagram, but close.

We don’t see 4:3 very often these days but Wes Anderson used it to immense effect in Grand Budapest Hotel and so did Lazslo Melis in Son of Saul.

It’s an engaging format that draws you in.  It suggests a time before cinemascope (16:9 etc) and only really works in period cinema of a time.

But it also lends itself to incredible framing, such as when our female protagonist floats down a river gradually disappearing out of shot, and later in the movie when the chief protagonists leave a bus and walk out of frame in a composition that Henri Cartier Breson would be proud of.

It’s one of the most beautiful movies I’ve seen in many years.

It is, but it isn’t really, narrative driven.  More episodic than story, but it does tell a tale about director Pawel Pawlikowski’s parents’ love affair set against the Cold War backdrop in his native Poland.

It’s fairly sordid in a way (his mother was abused by her father as a child) but without anything shocking to see.

The two leads ( Joanna Kulig and Tomasz Kot) are magnificent.  Brooding, beautiful (although unconventionally so) and real.

In particular, Joanna Kulig has a stand out performance.  She’s not one to show her enjoyment in life.  Sullen most would say.  But it is an immense performance.

It’s a love story, set against the challenges that Cold War Poland put in front of people of artistic belief where communist doctrine made creativity very difficult.

What Pawel Pawlikowski achieves is a mood piece of exemplary, peerless really, detail.

And it’s a musical.

I was constantly drawn to comparing it to La La Land, yet it is so NOT La La Land.  Partly it’s down to Kulig who shares the unorthodox looks (beauty) of Emma Stone.  Partly it’s the framing of scenes by Zal.

And the music fuses from Polish country folk to French basement jazz (which La La Land would have been so comfortable with).

This is an Oscar nomination shoe in.  It’s absolutely brilliant.

And, at 88 minutes, certainly does not outstay its welcome.