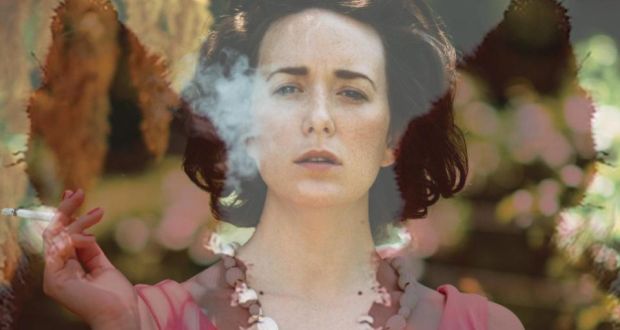 I’ve seen some cracking stuff this year already; The Incident Room, Shit, Baby Reindeer, Nightclubbing and Peter Gynt (EIF) are all there or there about the 5 star mark, and I expect all to win prizes this year.  There are at least two Fringe Firsts in that bunch.  Richard Gadd’s Baby Reindeer Summerhall, in particular, left me speechless.

But tonight we went super A-list with the classic Abbey Theatre of Dublin in a co-pro with Pan Pan Theatre Co and Gina Moxley.

It’s a three woman piece written by and starring the diminutive Gina Moxley who is a dab hand at playing male psychotherapists.  She shares the stage and the story with the titular Gloria; a 1964 divorcee aged 30 with a still high sex drive and a nine year old inquisitive daughter in tow.

In an experimental film in 1965 the real life Gloria was a guinea pig in three psychotherapy experiments that were filmed to observe different approaches to understanding Gloria’s motivations and drives.

The play brings these sessions to life against a rich tapestry of theatrical techniques and outrageously brilliant acting from both Moxley and Liv O’Donoghue (the beautiful Gloria).

The two make an odd couple, not least because of the notable difference in height.

They are wonderfully supported by Jane Deasy as the one-woman bass-playing Greek Chorus.

I can’t begin to describe how many moments come together to make this piece of theatre so magical; obviously the script, story and acting are the foundations but the direction by John McIlduff is like a master class.  The set design and costumes are stunning and the sound design an important contribution too.

It’s gripping, thrilling, ballsy feminism at its extreme best.  I’m a feminist so I wasn’t in the least uncomfortable: but bring an ounce of misogyny into The Traverse and you’ll be going home with your ball sack shrivelled inside you.

Catholisisim gets a good kicking (or at least its Irish educational sub divisional torture chamber). 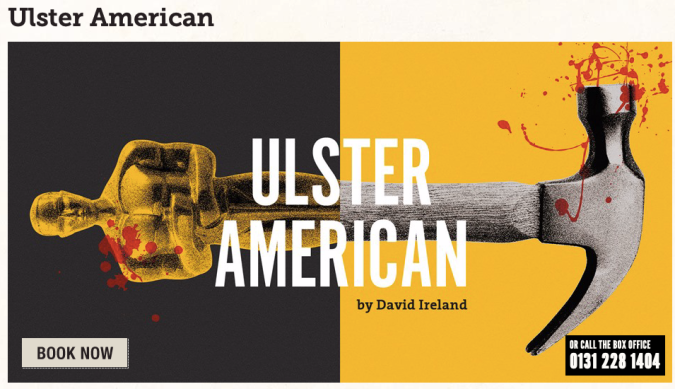 I saw this at last year’s Edinburgh Fringe Festival.  It was the best show in The Traverse’s best Fringe for years.  Gobsmackingly brilliant and it’s back with the same cast.  A bigger venue, but what could possibly go wrong?

At the time I described it as the bastard child of Aaron Sorkin, Frankie Boyle (maybe Jerry Sadowitz) and Martin McDonagh.

I can’t recommend it enough.

But it’s sweary, violent, sexist, outrageous, scary, rude, bawdy.  If you don’t like any of those things you’ll just have to fuck off and watch Strictly.  (You twat.) 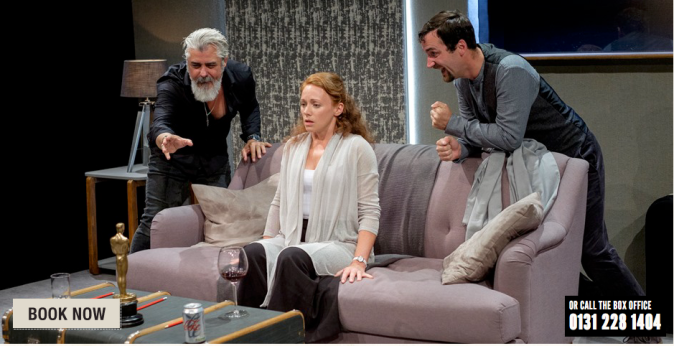 You know those things Frankie Boyle says that few of us even think?

You know the way Martin McDonagh captures the Irish ‘thing’?

You know the pace and eloquence that Aaron Sorkin brings to TV writing?

This is the mash up.  Kinda.

Written by David Ireland (I HAVE to see more of his work), brilliantly directed by Gareth Nichols and impeccably acted;  no, ferociously acted, by Darrell D’Silva, Robert Jack and Lucianne McEvoy.  This is joyous, mind tingling, laugh out loud, sick to the stomach farce, and political machination brought together in an unholy alliance that led to whoops, cheers and a standing ovation from a sold out Trav 2 audience that were simply blown away by total theatre.

90 minutes passed in the blink of an eye and you could have wrung us out after.

By revealing ANY of the plot would be a spoiler but you’ll never think of Princess Diana the same way again.

This will win every award going.

You’ve put up with me so far so here’s the final evaluation.  And the Gorman Awards.

Meet me at Dawn

The Performers by Irvine Welsh

Sisters Grimm is a multi-award winning Melbourne based experimental queer theatre group and Lilith is the barmy brainchild of Ash Flanders (who plays Lilith) and Declan Greene.

The three person cast includes Candy Bowers as the hilarious Sir Charles Penworth a Dutch based brain surgeon and Genevieve Giuffre as his assistant, Helen Travers, who is deeply in love with him (her as it happens).

The show concerns the civilisation of a feral jungle girl Lilith, who has been brought up by Lions in the jungles of Borneo and has an irrational fear of Penguins.

From the off it is obvious that Lilith is actually a man as Ash Flanders makes his entrance completely naked and ‘soaped up’ in a pink gunge that makes the vinyl floor of the set a veritable ice rink and creates many off script moments of hilarity.

Bowers’ hilarious Victorian bombast creates belly laughs a plenty.  Her performance is at the heart of the show but all three are excellent.  In a particularly amusing ongoing gag he can’t (or won’t) pronounce Helen’s name correctly; it’s a gift that keeps on giving.

There is a degree of Pygmalion about this because if Lilith cannot reach an acceptable level of civilisation and language she will be lobotomised by Sir Charles (or worse).

The threat pushes her onwards and the transformation is real until it all goes wrong and we are transported to London Zoo where Bowers has now assumed the persona of a South London Rapping Lion.

It is again hysterical.

This show is brilliant.

I’m not sure it has any deep meaning, but with its mix of a fine ‘Ripping Yarn’, slapstick, gender bending, extreme full frontal nudity and terrific acting it’s an absolute treat. 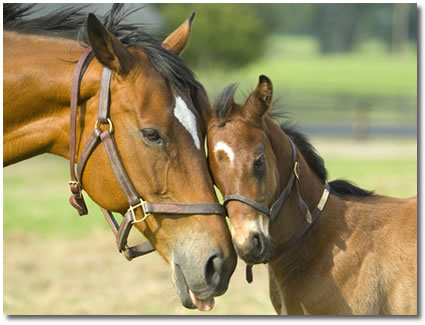 This is a hard one to review for a number of reasons.
First, it stars my cousin (Susan Vidler) so I have to declare an interest.

Second.  It stars the son of my most inspiring school teacher (Owen Whitelaw) Son of Walter Whitelaw, the man that made me gain a biology degree. So I have to declare an interest.

Third.  I didn’t really understand a fucking jot of it.

Now. to the business end and taking account all of the above.

It’s absorbing.  It’s intriguing. It’s empathetic.  It’s in some ways remarkable. Because it feels like an important piece of theatre that (actually) maybe I did “get”.

The performances rock.  Every single one of them and let me not leave out Vicki Manderson or Duncan Anderson because this is actually a four header ensemble piece.

So, what is it about?

My take, and it’s only mine is that it’s a kind of human condition observation (Susan told me that directed in a different way it would obviously be about the Industrial revolution and I can see why because it’s a tale of old meets new (Plough v Mill).

It’s highly sexual and very existential.  God features heavily and Manderson’s Character in particular pulls that together as she plays a part human, part mare, part.

What is she?  Mare or madam?

It’s this year’s theatrical cryptic crossword and I say go and figure it out for yourself because I failed on 1 across. 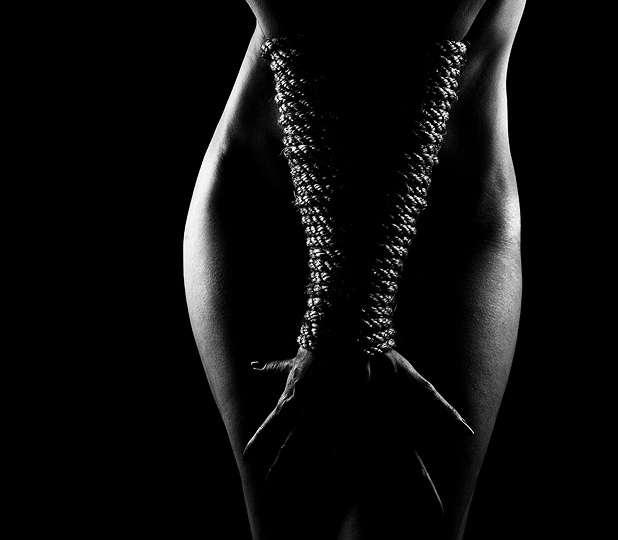 This was the first time I’d seen a Cryptic production and it certainly will not be the last.  It’s a double header with the first, The Baghdad Monologue, featuring a performance in silhouette behind three semi opaque white perspex screen shrouded in wire cage set to an interesting soundtrack by Alejandro Vinao and performed by Frances M Lynch.

This show was the best lit theatre production I have ever seen.  Congratulations go to Nich Smith. Technically stunning!  But the performance too was gripping and interesting as it charts the point of view of an Iraqi woman who has lost her son, Kamil.  It’s a brilliant satire and critical annihilation of Bush and his “Shock and Awe” strategy that is ultimately as moving as it is visually compelling.

The second is equally clever technically, Terror of Love finds a woman (Lore Lixenberg) trapped among her dreams on a viscious red Chaise Longue.  Behind her through back lit mirrors her dreams come to life as Clare Roderick gradually strips naked.  It’s entertaining certainly but lacked the resonance of the first. 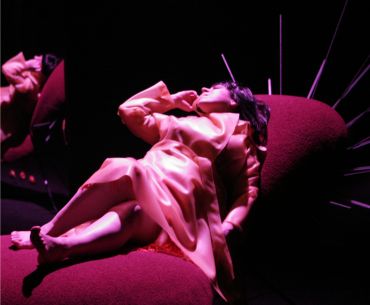 Nevertheless, the evening as a whole is highly recommended.