Wherever chef Roy Brett goes he seems to pick up the accolade of Seafood restaurant of the year.

For the last two years he held the title at Dakota’s South Queensferry Hotel Restaurant where my daughter Amy works.  Now he’s gone and done it again at his own place.

The restaurant is named Ondine, after a mythological water spirit and reflects the emphasis on seafood and shellfish.

It’s a cool, chic and reasonably priced (for top end) place, located in the Missoni Hotel complex, and boasts one of my friends, Craig Grierson, as its Maitre D.

The recognition is not really a surprise given the slew of outrageously good reviews the restaurant has garnered since opening last year.

Clearly it’s worth a try and if your feeling particularly fishtastic you’ll want to head for the sumptuous crustacean bar for a real maritime treat.

And so the rains came down.  In more ways than one.

Another exquisitely designed Lyceum set (by designer Janet Bird) sits gloomily atop a hill in the midst of a broody squall.  We spy an elderly lady rocking back and forth in the chair that is her ‘den’, her place to scheme against the daughter that she wants to own and control till her dying day.

To say the Folans are a dysfunctional family would be something of an understatement.  Over the next two hours we see how each is out to upstage the other in acts of outrage, cruelty, both mental and physical, and sheer bloodymindedness.  Mother Mag (played exquisitely by native Irishwoman Nora Connolly) and daughter Maureen (another wonderful Irish invader, Cara Kelly) set about each other with a passion that defies description.  Which is most evil?  Which is most desperate?  It’s hard to tell at times as the story of their undoing unravels itself; inch by feckin’ inch.

McDonagh clearly had a way to go in the swearing stakes before he brought In Bruges to the world but he got himself into the zone here in this, his first award winning play.

It crackles with intensity and passion (not all of the romantic kind) as Mag attempts to woo her way out of her mother’s clutches with the almost virginal Pato Dooley, a manual worker from the village who has had to emigrate to Ingerland to find work.  His blossoming relationship with Maureen, who is most certainly a virgin, despite her 40 years, is the centerpiece of the play and Pato wins us over with his naive charm.  His younger, home based, workshy brother Ray provides many moments of comic genius, particularly when he spars with the equally workshy matriarch Maureen.

What differentiates McDonagh from many of his peers is the naturalism of his dialogue and the pace at which it zips along.  With a cast this good there is no chance of his subtle wordplays and verbal tricks missing the mark (even if, from the middle of the circle, the volume was on the low side).

This is a wonderful performance; quietly assured, darkly humorous, affecting and ultimately very moving.  It is a must see.

The Lyceum Theatre in Edinburgh (where I am a board director) is getting better and better at its social marketing and use of e-marketing.  Here’s a great trailer for its latest production; The Beauty Queen of Leenane by Martin McDonagh, author of In Bruges that opens tonight for three weeks.

Nice ad; but the clever bit is that you can connect, via facebook, to your loved one and send them this movie as a Valentine’s day greeting.  Leaving you free to get to the footie.  Sweet.

Ria and I sat up till the wee small hours watching Amy Williams piss all over the Gerries.  It was a comfortable victory in the end and one made all the more hilarious by the preposterous commentary by Paul Dickenson and Colin Bryce in which one of them stated that Britain now truly had world domination in this sport.

Ok, let’s have a little perspective applied to that claim shall we?  We have won medals in every Olympics so far in the Skeleton that’s five in total (across men and women).

As one can see we do indeed have world domination in this event (That is if you exclude Canada and the USA and if you count 1/3 of the remaining medals as domination).

What’s more they had a habit of not actually commenting on what they are going on.  For instance one competitor took 5.16 seconds to the first checkpoint and the squealed with excitement “What a fantastic start”.  The very next took 5.15 and they said”  Oh my god, she’s really blown it with that awful start.”  Doh!

Anyway.  Well done to Amy.  A brilliant result.  Not your fault the commentators are dicks.

And fantastic given that she was actually competing in a mixed event as Germany’s Kerstin Szymkowiak, who was second, clearly demonstrates.

Who's that girl? The one on the left? Nah, that's Kirstin (or is that Kevin?) 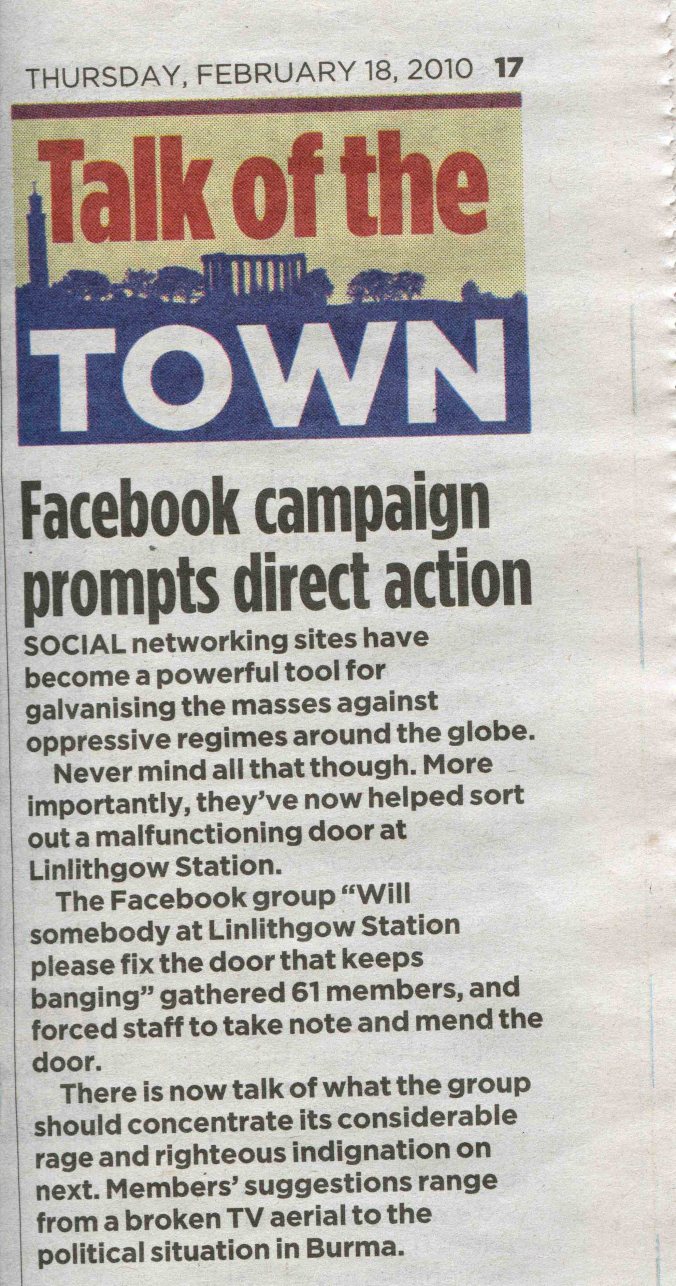 From the Edinburgh Evening News

I am grateful to Jamesy boy for pointing out that losing weight does have its downsides so I will have to think about toning.  (don’t want to end up with a vag-neck after all.)

The music threatens to break out into “Deliverance mode” at almost any moment.

Yes folks.  It’s true.  A couple in Glasgow gave birth to their baby in the Yorkhill hospital and chose a very unusual but quite traditional, even Victorian, sounding moniker for her.  And it wasn’t Monica.

After having to endure the most irritating banging door in the history of banging doors at Linlithgow train station for a month I took the issue into my own hands and started a Facebook group to create pressure and get it fixed.

My pal Myles died suddenly last Saturday of a heart attack (aged 50) leaving his wife Ann, Son Kevin and daughter Kelsey.  Jean a and I went to his funeral yesterday and he was sent off in great style at a Humanist service.  The speeches were fabulous and the most poignant moment was when his great freind Peter Martin summed up his life using an acronym of his name.  Peter did a wonderful job and Myles will be very greatly missed by all who knew the great big guy.  See you pal; or is that mate?  Missing you already. 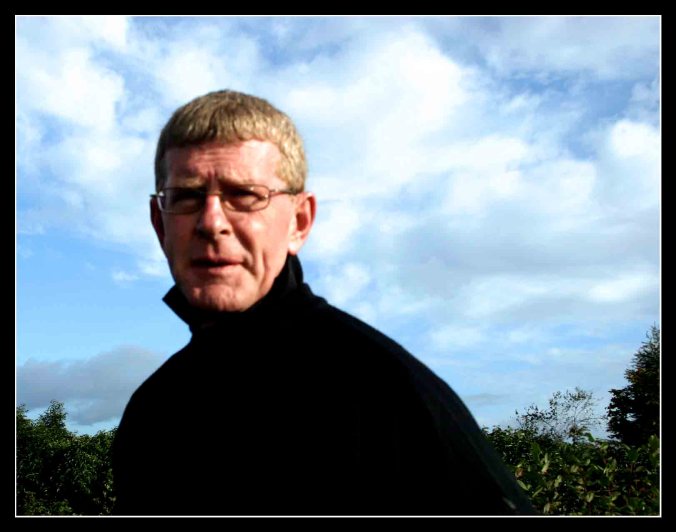 You play “Transmission” on Steel Drums.

Then it’s a piece of piss.

Ladies and gentlemen.  I bring you Steel Harmony.  Take it away boys.

My Brother in law, Alan, is working with this guy.  Blues ain’t my scene but I like this.  Maybe that’s because it’s nu-blues and the guy’s only 27.

No. This is not an optical illusion. A game in hand and only two points adrift of a Champion’s league spot more than half way through the season.

Oh yes, and Hearts were dumped out of the diddy cup too.

I am not familiar with director Jacques Audiard’s work.  What I now know though is that he is a very skilled operator indeed as this gripping French thriller demonstrates.  Nominated for the Oscar for Best Movie in a Foreign Language it would appear it’s in a straight shoot out with Michael Haneke’s, The White Ribbon.

Both movies are terrific and both deal with the evil in man in very different ways.  In The White Ribbon it’s all about the gestation of fascism in a typically (for Haneke) underplayed, subtle and metaphorical way.

Here, Audiard goes straight for the jugular (and for those that have seen the movie they will know that this comment is pretty literal).

A Prophet (to give it its English moniker) is as graphic a prison drama as you’ll see. It focuses mainly on the relationship between a misfitting North African Muslim boy who is flung into an unnamed French gaol for mudering a copper and an aging Corsican mafia leader (played convincingly by Neils Arestrup – whom British viewers could easily mistake for celebrity chef Anthony Worral Thompson)

As the movie develops, the young Muslim, Malik (played with convincing menace by Tahar Rahim), becomes an increasingly trusted aide of the old master.  But the relationship is built on hatred and bitter distrust.

Malik, gradually gains the upper hand as he increasingly frequently gains passes out into the free world to carry out a variety of unsavoury tasks for gangland boss Arestrup, whilst fitting in a bit of empire building himself.

The movie is visceral, at times shockingly so, but never short of engaging and we build a close bond with Malik as his story unfolds.

An interesting device in the movie is to include a series of ghostlike appearances of one of Malik’s early ‘victims’; the ghost giving Malik premonitions that contribute to his ultimate nomenclature as “The Prophet.”

These have clearly been the inspiration for this brilliant government commercial…

So.  Who will prevail?  The Cannes Grand Prix winning A Prophet or the more cerebral and understated White Ribbon?

Well, my vote goes to Michael Haneke because, despite both movies being truly excellent, Haneke’s style edges it for me.

A great category in a relatively weak Oscars year.